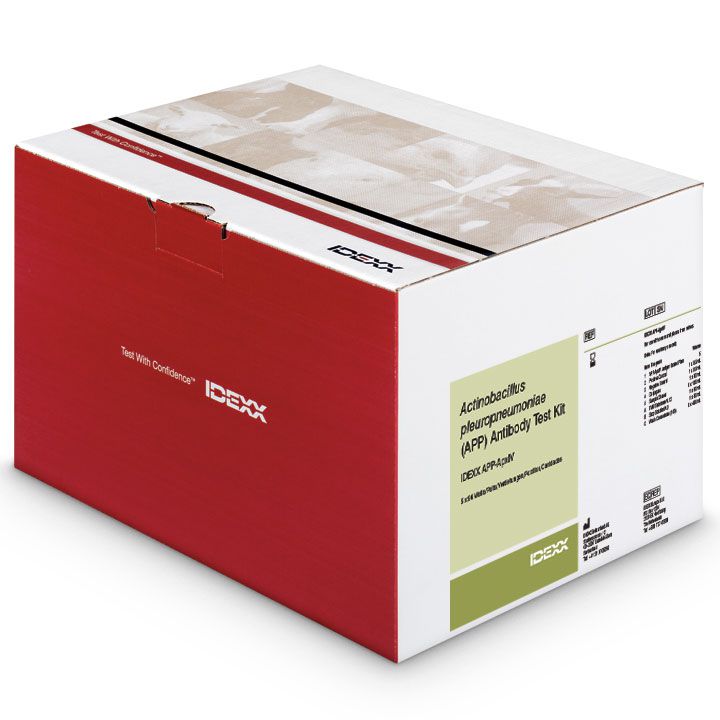 The IDEXX APP-ApxIV Ab Test is an enzyme immunoassay for the detection of antibodies against Actinobacillus pleuropneumoniae (APP), the causative pathogen for swine pleuropneumonia, in serum and plasma of swine independently of the APP serotype. It is possible to differentiate vaccinated (negative test result) from infected animals (positive test result).

Swine pleuropneumonia caused by Actinobacillus pleuropneumoniae (APP) is a highly contagious pulmonary disease that may cause important economic losses. Clinical signs of the acute disease are dyspnea, coughing, anorexia, depression, fever and sometimes vomiting. In the absence of treatment, the disease can progress very rapidly and death can occur within a few hours. Chronic infections are characterized by cough and pleuritis.

It is important to differentiate infection from disease. Indeed, many herds are infected with APP without presenting any clinical evidence of the disease. Carrier pigs harbor APP in their nasal cavities and/or tonsils. These animals represent the major source of dissemination of the infection between herds. Mixing animals infected with virulent APP strains together with immunologically naive animals, inappropriate management, concurrent infections (e.g., PRRS, pseudorabies) and/or stress conditions may be responsible for the sudden appearance of severe clinical disease.

Fifteen serotypes have been described, which variously express four different proteinaceous cytotoxins (ApxI, ApxII, ApxIII, ApxIV) belonging to the RTX toxin family. There are many lines of evidence that suggest these toxins play a predominant role in the pathogenicity of APP with different activities (hemolytic, cytotoxic, etc.). Because of their strong antigenic properties, they have been used in the serodiagnosis of APP infections. However, other bacteria express toxins that serologically cross-react with ApxI, ApxII or ApxIII.

In contrast, ApxIV, a fourth RTX determinant, has been found to be common and specific to all serotypes.